Corruption Versus Ethics in the Private Sector 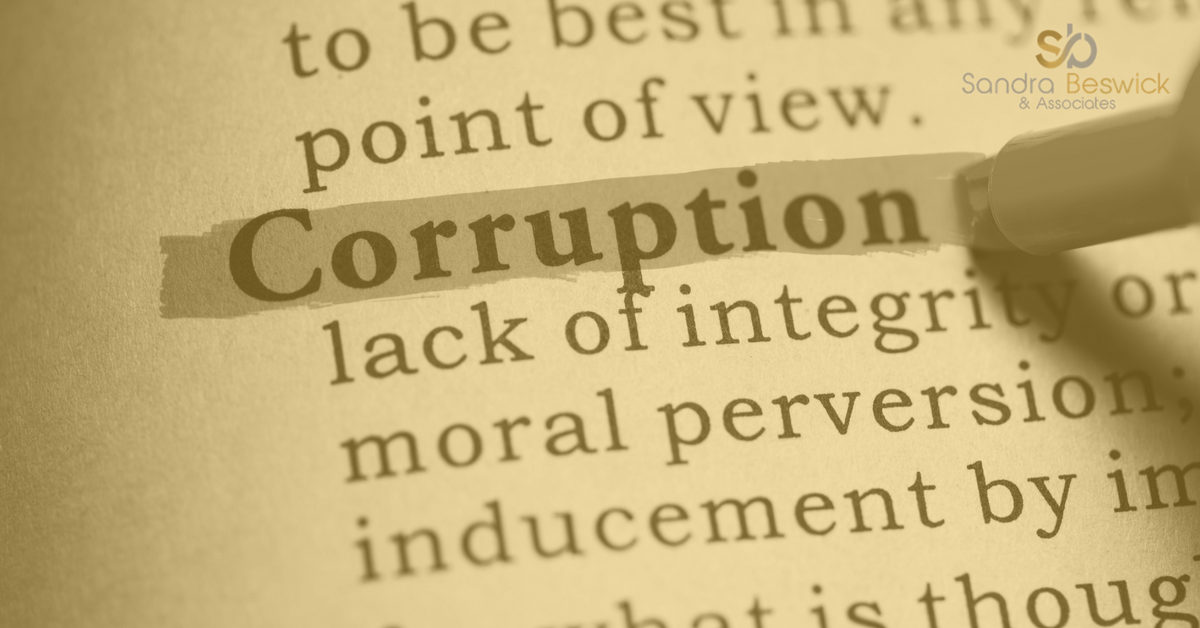 In the history books of the future, corruption will probably be the defining feature of South Africa’s political life in 2017. But with our focus fixed firmly on government this year, we tend to forget that this scourge pervades all sectors. Corruption is an amorphous being that infiltrates everywhere, lurking in dark corners, behind the scenes and all invasive, with the power to cause the demise of economies. It is defined as the abuse of the resources of a company or organisation for personal gain and power.

Not only the privilege of politicians and public sector officials, corruption is prevalent in South Africa’s private sector as well, across the spectrum of the economy from large conglomerates, monopolies, investment holding companies and their subsidiaries, to medium-sized and small businesses. More often than not these organisations are subject to unethical and corrupt behaviour by the shareholders (owners), directors and employees.

It starts with collusion and price fixing

Collusion in market competition takes place within an industry when rival companies co-operate for their mutual benefit. Investopedia describes it as a non-competitive secret or sometimes illegal agreement between rivals to disrupt the market’s equilibrium.

South Africans have witnessed many incidents of collusion including the finding that four of the large construction companies colluded and fixed prices for the building of stadiums for the 2010 World Cup. There are many incidences when large companies muscle out their smaller counterparts through aggressive cut throat pricing tactics and credit and payment terms from their supply chain.

The media has often reported on cases where designers have marketed their creations to large companies, only to find copies can be found for sale in the stores. I usually advise small businesses that being awarded large orders from these companies can often lead to the demise of their business. They need to find other niche markets where their products will attract the level of pricing and payment that are profitable. The unfair treatment meted out to small businesses certainly discourages entrepreneurial behaviour.

Collusion is often regarded as the forerunner for the corruption in South Africa. ‘White monopoly capital,’ to coin a hackneyed phrase, is blamed for being the main driver of corruption. The view is that if collusion was acceptable amongst white cartels, then we shouldn’t be surprised that corruption is rife in the new South Africa.

But this argument doesn’t work for me. Two wrongs don’t make a right. You cannot justify one just because it is the outcome of the other. I don’t condone corruption or collusion!

Ethics seeks to resolve questions of human morality by defining concepts such as good and evil, right and wrong, virtue and vice, justice and crime.

The global market is seeing a growing trend in raising the bar for ethics in the corporate sector. According to the Harvard Business School, a ‘new performance standard’ is emerging for world class companies, one that is distinguished by the achievement of both financial and ethical excellence. Now we need to see this transformation take hold in South Africa.

Leading by example and displaying ethical behaviour sets the tone for the trading of the business and builds trust among all the stakeholders including shareholders, employees, customers, and communities. The focus should not be on satisfying the shareholders and their returns at the expense of the other stakeholders.

However, despite King II bestowing upon South Africa one of the world’s most respected benchmarks for ethical corporate governance, my work in business rescue exposes me to deplorable lapses in governance in the private sector.

This also starts at the top

Directors and owners of companies have fiduciary duties specified in the Companies Act of 2008 and it is incumbent on them to act ethically in all their daily business dealings. A director is obligated to act honestly, in good faith and in a way that is in the best interests and benefits of the company. In addition, there are lawful and responsible ways of rewarding directors, shareholders and investors within due governance processes.  Dividends can be declared if the business passes the liquidity and solvency tests.

Yet in my line of work I regularly come across business owners or investors who feel it is their right to do as they please without adhering to good governance procedures and ethical behaviour.

Our investigations in cases of business rescue have revealed many types of unethical behaviour bordering on reckless trading. Often the bank account of the business is used to fund lavish lifestyles which the business cannot afford. This type of conduct is usually one the main reasons for the financial distress facing the business.

There is a fine line between corruption and reckless behaviour practiced by some directors and owners. These are a few examples of glaringly unethical behaviour I routinely come across.

We often feel desperate about the levels of corruption in South Africa and the man in the street feels powerless to fight it. However, we allow ourselves to become powerless if we allow corruption to occur in our daily lives.

Ordinary citizens can implement a zero tolerance policy on corruption and enforce responsibility for actions by the perpetrators of corrupt and unethical behaviour. We have access to various organisations and channels to fight the scourge, such as the media (including harnessing the huge power of social media), whistleblowing, civic organisations and the legal route. If we all start to speak out against the collusion and corruption we encounter in our daily lives, no matter how small the incident; or if we speak out against the intimidation of those who take a stand, we can grow the power of civil society to hold our leaders accountable.

Corruption may start at the top, but disruption can start at grassroots level.